In summer 2000 I returned to Bath to undertake a series of projects in sites of importance to women’s history in this World Heritage city. pro fanus [in front of the temple] took place at the western entry to Bath Abbey, a famous church and a popular site for street performers and artists during the summer season. Bath Abbey is also located halfway between the city’s former “red light” district and a reformatory for “penitent” sex workers, operational between 1805-1914.

Significantly, the front of the Abbey was decorated with figures of angels climbing up and down stone ladders on either side of the main portal. I was struck by the fact that of all the angels, only one was carved to appear female, and she was very distinctly upside-down. If not falling, this female angel appeared to be trying very hard to resist the pull of gravity, the earthly, and perhaps “sin.”

The fallen angel was a powerful trope in nineteenth-century England, one that signalled this era’s obsession with female morality, sexuality, and purported lack of reason. A “fallen woman” was one who had had sexual relations outside the bounds of marriage, and was thus not only fallen in a moral sense but also fallen out of or away from the social standing she may have one held. Of course, these ideas tended to be rehearsed by middle-class men and, to a lesser extent, women, and were imposed primarily upon others of their class and upon working people. So the discourse of female morality was also a discourse about class, difference, and the supposedly “natural” hierarchy of men over women, and of upper class over lower class.

These ideas are at times overwhelming in their reduction of lived, historical women’s lives into bleak binaries about sex and gender. Wanting to locate my response to such binaries firmly in Bath, I took the figure of the earthbound female angel as a starting point for a performance about the history of women in this city, particularly in the nineteenth century, when the stone angel had been carved. To prepare for my performance, I familiarized myself with texts by Bath’s best known architects, all male, and the city’s history of prostitution, which is long and varied. 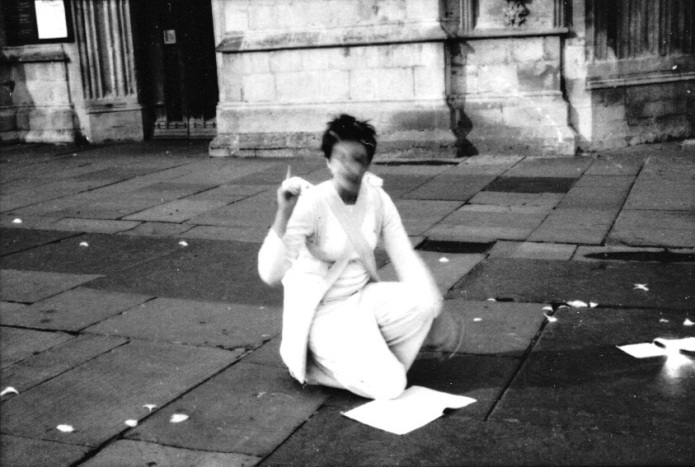 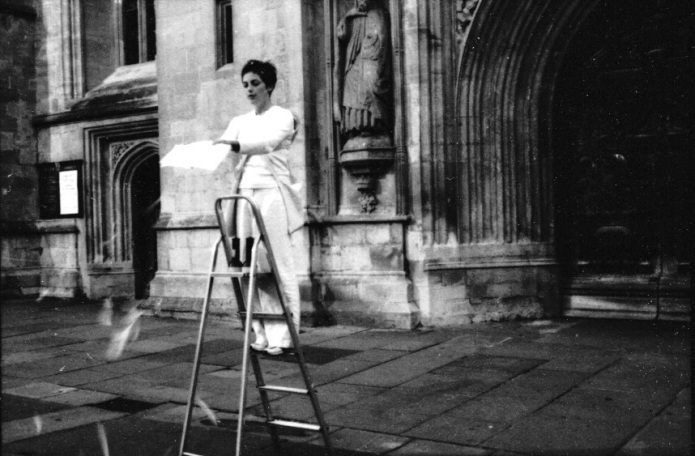 Dressed all in white, I wore a harness that attached torches to my shoulders, which cast light outwards from where wings might sprout. I read excerpts from archival and historical sources about Bath, women, architecture, and the local “scourge” of prostitution, from books I had bound by hand. As I opened each book, white feathers scattered from its pages, and fell on the ground.

I used a folding ladder to echo and underscore my attempt, via the performance, to complicate the story of axial morality as suggested by the falling female angel on the facade of Bath Abbey. I used flashlights, pointing to the feathers on the ground to reframe the idea – as expressed by the downward-facing angel – that falling to earth, being part of the lived world of human experience, is something that women should avoid. 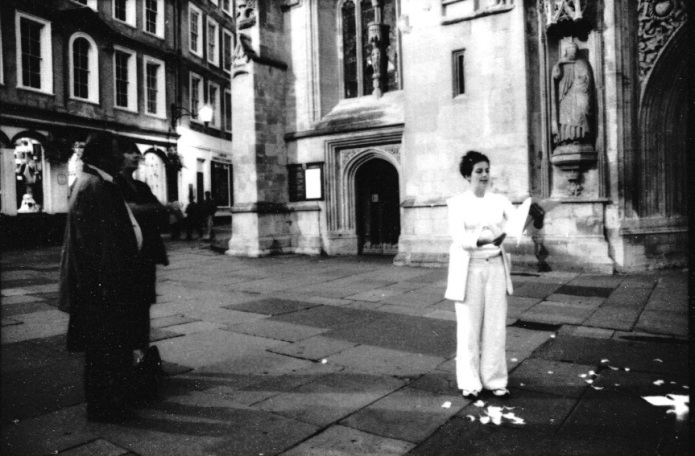 Instead, my performance invited spectators to consider the importance of embodied, not angelic, existence. The performance lasted 15 minutes, and took place twice at dusk in September 2000. 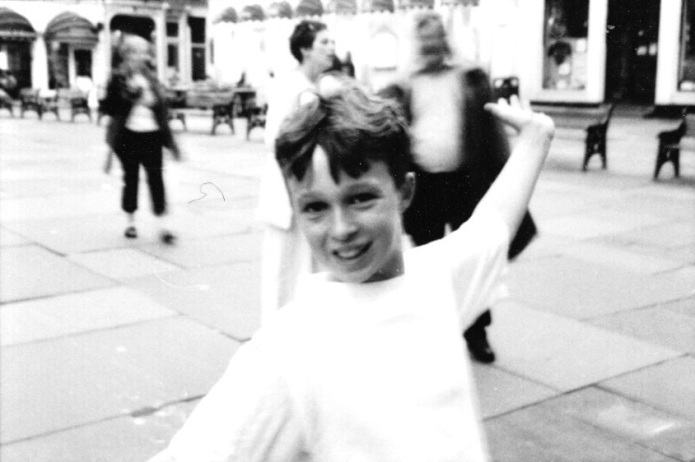 In Winter 2021-2022 I began a series of small paintings on cardboard called “Wintersweet”. I had been thinking about the way that winter, despite being a time of dormancy, or […]
Wintersweet, 2021-22

At the centre of Shaughnessy Village in Montreal, Canada, is a mansion, from which the district gets its name. Once home to some of Canada’s most powerful and wealthy families, […]
The Lipstick Caryatids, April 2019

In 2016-17 I am working on a series of acrylic paintings on unprimed, unstretched canvas. My inspiration is the Giardino dell’Eden – quite literally a walled, locked garden named Eden, […]
Giardino dell’Eden, 2016-
Loading Comments...