In the late 1990s and early 2000s I began to work more seriously with performance as a mode of engaging with publics, and spaces. Through my studies with feminist professors such as Janice Helland, Joan Acland, and Catherine MacKenzie (all then working at Concordia University’s Department of Art History), I had begun to see that taking up space was an inherently political gesture, and how that gesture – placing oneself in space – had multiple potentials in terms of feminist art practice. At this time, I was still exploring the image and signification of the winged human figure, and my research into this world had, through my studies with Rosemary Drage Hale, led me to explore the concept of the soul. These various investigations resolved in a performance I created in the summer of 1999, titled breathe/animer.

(The invitation circulated in advance of the performance.)

In early June, four performers and I occupied two different street corners of Montreal during morning rush hour. The performers, dressed in white and wearing wing-like sleeves, each took their place at one of the four corners of the intersection and stood motionless next to a low ladder. Then, violinist Rhaya Fridman played an improvised composition as she walked slowly from one corner to the next, making a complete circle. As she passed, each performer climbed their ladder and raised their arms. Each of us had an ancient word, and its definition, printed in English and French on our clothing. These words related the importance of breath, air, and wind to life: ruah, nefesh, psuche, pneuma. When Rhaya completed her circle, the performers lowered their wings/arms, and slowly descended their ladders. Rhaya finished playing, and the performance ended.

The following images give a sense of the sequence, which we undertook at the corner of President-Kennedy and McGill College, then at the intersection of Sherbrooke and Bishop. I chose these locations for their proximity to McGill and Concordia Universities, also to the business district and one of Montreal’s two biggest art museums, the MMFA. Both sites were heavily trafficked by cars, pedestrians, cyclists, and were either routes of public transport, or in close proximity to a metro station.

Above, Caroline Alexander at the corner of President-Kennedy and McGill College, 9am, Thursday June 10, 1999. 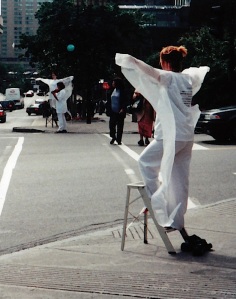 Above, Rhaya Fridman has begun to walk the crosswalk; Caroline’s arms are raising and she climbs her ladder.

Rhaya pauses for the lights as I raise my arms and ascend my ladder (which is rather like rubbing your stomach and patting your head at the same time…). 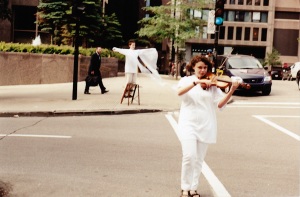 Rhaya crosses to the next performer, while a curious businessman passes on my other side. 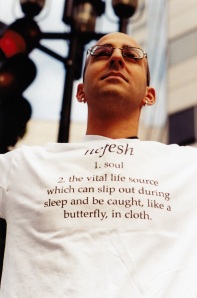 Jeffrey Golf, above, wearing one of the hand-printed shirts with the word “nefesh”. A lovely word that, as the image shows, means soul, life source, something that can slip away through the breath, while dreaming, yet also be caught if escaped.

All text used in the performance was provided in French and English, which was important to me given our setting.

I was lucky to have such wonderful performers. Jeff is a deeply spiritual person who immediately took to the concept of being winged in this way, and brought a great peace and serenity to the performance.

A beautiful picture above of artist Kaem Huska, who was the only one of us brave enough to stand on the very top of her ladder during the first phase of the performance. Throughout, she brought a powerful joy and strength to the events, which infused all of us. Below, we are seen leaving McGill College to take up our position for the second round, at Sherbrooke and Bishop.

Above: standing in front of the Church of St Andrew and St Paul, Caroline now also braves the top step.

As does Jeff! Here waiting for Rhaya to approach with her violin.

Above: Kaem in the foreground, myself just visible beside her left hand, now also standing on the top step. Some spectators and onlookers have gathered in response to the invitations I sent out in advance of the date. 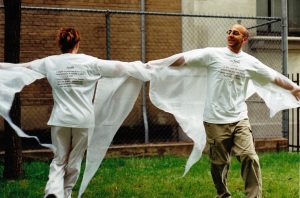 The moments following the second performance were magical. It was as if the work had somehow filled us with exactly what the ancient words on our clothing promised were part of the simple act of breathing: joy, creativity, spontaneity, peace, and even love. Caroline and Jeff improvised a dance on the small, green grounds of the St Andrew and St Paul churchyard, while Rhaya began to play a jig. Caroline, herself a performance artist, also explored the possibilities of her costume as an angel who had not fallen but instead found herself on the earth. 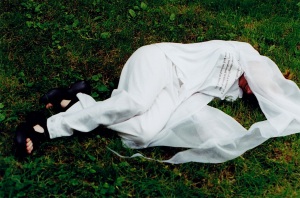 In all, there was a great collective sense of peace and pride in what we had done, which was mostly simply to breathe together in public space, and encourage others to do the same. It was a truly special moment, which I think can be seen in this lovely photograph of Rhaya and Kaem in the coffee shop where we then went for some repose and reflection after the event.

I’m much indebted to my co-performers in this work: violinist Rhaya Fridman, and the “angels”: Caroline Alexander, Jeffrey Golf, and Kaem Huska. Many thanks to photographer and academic Grayson Cooke, who took the images seen here, and videographer Eddie B., who captured footage that filmmaker Sarah Bachinski later worked into a film documenting the piece.