In May 2014, pouf! art + architecture (Cynthia Hammond and Tee Strickland) and Urban Occupations Urbaines (Shauna Janssen) collaborated with artist and art historian Adeline Paradis-Hautcoeur, choreographer Leslie Baker, and eight performers to create Illumination, a didactic and performative walk through the city of Montreal.

Cynthia leads the group out of Westmount Park to visit the Arts & Crafts and Queen Anne architecture of the district.

We conceived of this walk as a moving public artwork, each section planned to integrate with and literally “illuminate” the cityscapes our participants would pass on a walk from Westmount Park to Parc-St-Henri.

Leslie Baker’s team of performers great the participants with their site-responsive, choreographed movements.

A creative reinterpretation of the guided tour, Illuminations led participants through the urban landscapes of Montreal’s wealthiest neighbourhood, Westmount, along the path of the now buried Glen River, and into the historically industrial and working-class neighbourhood of St-Henri, made famous by such authors as Gabrielle Roy, and her award-winning novel, Bonheur d’occasion (1945) [The Tin Flute]. 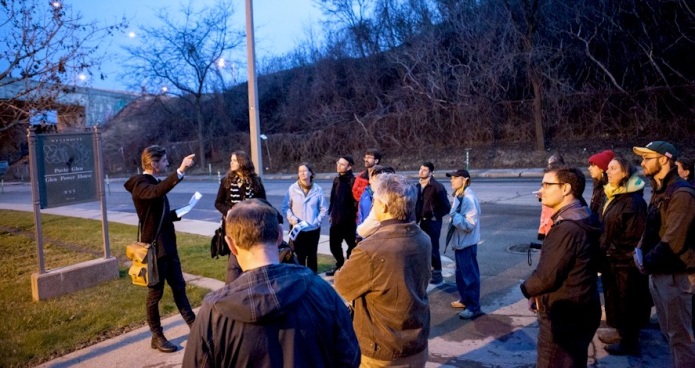 Tee Strickland exchanges observations with the participants about the differences between Westmount and St-Henri’s urban landscapes.

The participants find the second performance waiting for them in the Glen Tunnel, which follows the path of the buried Glen River towards St-Henri.

We were inspired to develop this artwork in response to, and in collaboration with Adeline Paradis-Hautcoeur’s creative research about the cultural landscape of the lost Glen River. This in turn had been inspired by a didactic walk that Tee Strickland and I created through the same parks and streets in 2013. When Dr Steve High (Concordia University) invited us to contribute an artwork to his Deindustrialization and its Aftermath conference, we knew we wanted to develop the walk and narrative through a series of site-responsive performances that would both defamiliarize and intensify the spatial, visual, political and economic differences between St-Henri and Westmount. It was important to show our 25 participants how these historic differences have cast a long shadow into the present, even with the newer processes of gentrification and deindustrialization taking effect.

Participants are invited to view the vernacular architecture and traces of St-Henri’s industrial past, from just below the Ville-Marie Expressway.

Performers and participants again encounter one another around the base of the remarkable (and remarkably colonial) commemorative statue and fountain in the centre of Parc St-Henri.

The performers and participants use flashlights to illuminate their surroundings in Parc St-Henri.

Adeline Paradis-Hautcoeur reads from Gabrielle Roy’s famous 1945 novel, Bonheur d’occasion. Her words, in French, conclude the performance and the walk.