As part of my ongoing research about the winged human figure, I undertook a number of projects in which I made small wings and offered them to others to wear. Winged for a Day – Montreal was one of the first forays into this exploration. I made about two dozen wings out of mixed media, often paper, which I hand coloured, embroidered, or otherwise marked to be unique. Participants were invited by email and by poster, and could choose which wing they wished to temporarily wear. In my then-studio in the Concordia MFA sculpture building on Overdale Avenue, I sewed the wings – just one per person – to my participants’ clothing, then photographed the results. It was interesting to me to see how the addition of a wing inspired either a little performance or a sense of solemnity in the wearer, or sometimes just a little shyness. 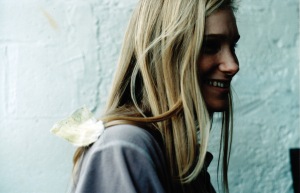 MFA student, whose name I have forgotten (apologies) 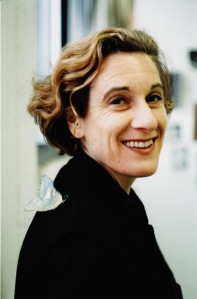 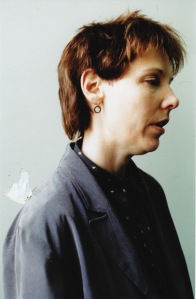 I found many of the photographs to be beautiful, and the experience gentle and rather tender. Of course, this was not to all participants’ taste, and some sought to recast the event by departing (with my full support – this was research) from the proposed course of action. The most dramatic of such gestures came from Ludovic Mennesson, a fellow student, who insisted I sew his wing directly to his skin. Ludovic, our cohort’s provocateur, quite rightly pointed out that fairies and angels do not have wings growing from their clothes but as part of their bodies. I regret that I don’t have a photograph of myself actually sewing the wing to Ludovic’s right shoulder blade, but I do have this image of the result. 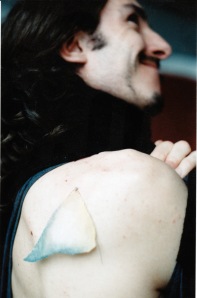 Merci, Ludovic. With this collaboration that lasted only a few minutes you pressed me to underscore  the violence and ambivalence of the winged human figure, themes which were present throughout my reading and writing, but which had been more subtly present in my studio practice thus far. Thank-you too to Anna Woodrow, my former fellow doctoral student in the Humanities Interdisciplinary Program at Concordia, whose image is at the top of this post.

If anyone pictured here would prefer me to remove their image, please let me know and I’ll do so immediately.