In my last year of living in Hamilton, Ontario, I had an exhibition at a new restaurant on King Street West (near downtown’s Hess Village), which showed local artists’ work. The owners had sought to create a warm and inviting atmosphere, somewhere between Italian bistro and sleek Art Deco. Visiting the space in advance I was struck by the rich scents emanating from the kitchen, the shades of plum, red, and burgundy, and the minimalist copper lamps and scones. The resulting series, Floralscapes, was inspired directly by the design decisions the restaurant owners had made, and by the idea that people would be coming to savour wine and food first, and art later. I wanted to enter into the olfactory and haptic luxury of the restaurant, rather than compete with it. 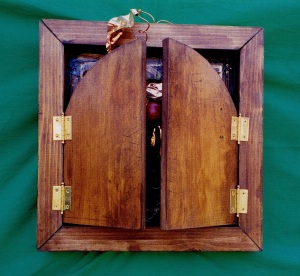 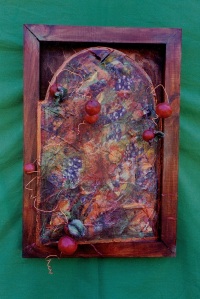 The copper wire and hinges were material references to the lighting design, while the “fruits” evoked, for me, the tomatoes, berries, and other foods that patrons would be eating. I used the opportunity of this series to continue to explore my interest in fabric, ornament, and various means to build texture and three-dimensionality within works that were, essentially, wall-mounted pieces. I was certainly inspired by one of my jobs at the time, assistant to Hamilton jewelry-maker Lisa Parker, which saw me working with collage and fine metal wire. Portraiture, and self-portraiture, were also themes within the exhibition.

With these works I also explored some of the possibilities of moving parts. In the self-portrait above, for example, the central oval disk is mobile; it can spin 360 degrees. Other pieces had doors that could open and close, or parts that could be moved or removed entirely from the work. In this exhibition I moved away from landscape while maintaining my compulsion to bring painting and sculpture together.

In almost all the pieces, however, there is a theme of a self being contained, or trapped in some kind of enclosure, either a tower such as seen above, or a sort of vital life essence being kept behind doors. I think there is no accident that these works came about at a time that I was summoning the courage to make a major life change. But this was courage and change that I could not afford to do without. 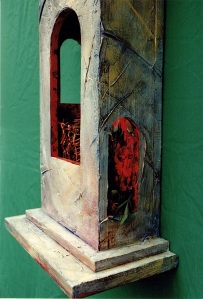 Pieces in the exhibition ranged from approximately 1 x 1.5′ to 2.5 x 4.5′ (the largest piece was a work I no longer have any record of, but one that two friends of mine managed to use as a headboard for about 8 years – this probably gives a sense of the dimensionality – and well-built nature – of the works).